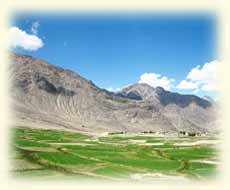 If you are looking for a relatively short, moderately difficult, and utterly beautiful trek, then this is the one for you!. It is well- known as the "ancient silk route" for camel traders, bringing their wares from Central Asia through the Himalayas into northern India. Although traders are a thing of the past, they left an indelible mark on the Valley in the form of the present herd of bactrian camels, descendents of the original beasts of burden. The beauty of the trek is surpassed only by the final day- a spectacular bus or jeep ride over the highest motorable road in the world 5606 m.

We will leave Leh in the morning by jeep to the beautiful village of Sabu, where we will begin our trek by crossing a bridge. Further along the trail amidst grass and meadows, we will find herd of yaks and Dzos (crossbreed of yak and cow). We will ascend gradually towards our campsite while enjoying the incredible view of snowcapped Stok Kangri to the south. This is fairly strenuous day. 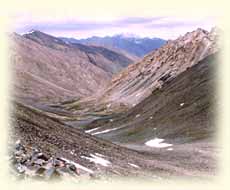 After a hearty breakfast we will proceed towards the Digar la 5300 m. The ascent to the top of the pass is fairly steep. Your hard work will be well rewarded by the stunning views you will witness at the top of the Digar La - Karakoram Range to the north and Stok range to the south. We will hang prayer flags among the existing ones at the top of the pass. It is widely believed among Buddhists that raising a prayer flag atop the pass brings good luck for the journey. In the past days, it was a common practice for the traders on the silk route to have safe journey and flourishing business. From the pass, it is an easy walk down to the camp, a very pleasant river- side spot.

Today's trek will be full of adventure. Shortly after our morning start we will reach the picturesque village of Digar, and then continue a long hot, dusty trail through the desert until we reach a spectacular sand dune - you will have to see it to believe it! We will then continue through a swampy area to our third night's spot, a beautiful area set amongst a grove of trees.

Today again leaving in the morning hours we will continue our trek in the desert along left side of the Shayok River. The trail ahead is hot and dusty, so in order to prevent dehydration, we need to have plenty of water. After a tiring hot day, we will end the day at the river- side village of Rongjuk. You must not miss this chance to dip in the cold river to cool down.

Our last day of trekking is an easy one. We will walk only one 1-2 hrs. to our destination Khalsar, a military town in Nubra. From here you will have the opportunity to leave the group and spend some time on your own exploring further into the famous Nubra Valley, or going with the group by bus or jeep over the Khardung La 5606 m. to Leh. 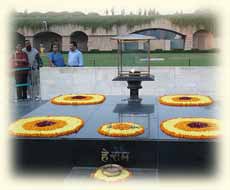 After an early breakfast, we drive at 0730 hrs to Agra, the erstwhile capital of India under the great Mughals and known for The Taj Mahal It has always fascinated Indians and foreigners alike. On the way we visit Sikandra (Tomb of Emperor Akbar). At Agra after lunch (own lunch) We visit the incredible architectural excellence of Taj Mahal, built by emperor Shah Jahan in memory of his beloved wife Mumtaz Mahal. Next we visit Agra Fort - Built principally as a military establishment by Akbar in 1565, the red sandstone Agra fort was partially converted into a palace during Shah Jahan's time. Though the principal structure was built by Akbar, many more additions were made by his grandsons. This massive fort is 2.5 kms long and is considered as the predecessor of the Delhi Red fort. After Visiting the fort we drive back to Delhi at 1700 hrs. Upon arrival in Delhi. Finally we will have farewell dinner and later we transfer you to the International airport.