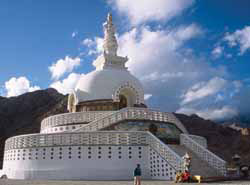 Located around 22 kilometers from Srinagar, Dachigam National Park is sprawled over an area of 141 sq km. Offering most scenic natural beauty, the park is clearly divided into an upper and lower region. The spectacular forests and beautiful scenery add charm to the park. It was once the hunting spot of the Maharaja of Kashmir.

The park has been a protected region since 1910 but after relocating ten villages, it was at last upgraded and declared as a National Park in 1981. The name Dachigam literally stands for "ten villages" which were relocated for its formation. Initially built to ensure the clean drinking water supply for Srinagar, it is the final proper home of the Hangul or Kashmir Stag. It also provide shelters to many rare species within its borders.

Being a habitat of the rare Hangul or the Kashmir Stag which is the only species of Red Deer, found in India. During winters, Hangul gather in the shelter of the lower valleys. Other important inhabitants of the park include the Himalayan Black Bear, Goats like Markhor and Ibex and various Himalayan birds.

The leopard, which is rarely found as the elusive Snow Leopard that is found in the higher altitudes.
Tourists can also see other animals like Himalayan Marmot and Musk Deer.

Flora
There are around 500 species of shrubs and herbs. The park also has 50 species of trees at Dachigam. A major area of the park is covered by coniferous forests. The alpine pastures, scrub vegetation with deep gullies and oscillating meadows form the flora here. You can also see exquisite variety of flowers, covering most of the terrain.

Other Attractions
Near to the entrance of the park is the Trout Farm (A Government managed Trout Farm). You can learn here about the breeding of fish. Leopard Zoo is another attraction which is situated inside the lower Dachigam. The Forest Department at the park has held 3-4 leopards in an enclosure for tourists to see.

Best Time To Visit
From May to August

By Air: The nearest airport is Srinagar, 22-km away.
By Rail: Jammu is the nearest railway station.

There are lodges and rest houses available within the sanctuary. Other accommodation options include hotels and houseboats which are available in plenty in Srinagar.