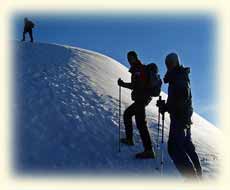 Stok Kangri is one of the most beautiful peaks in Ladakh. The climb is technically not difficult, and requires no special mountaineering skills. It gives you a real opportunity to climb a 6150 m mountain in less than a week, which is not possible in any other part of the world. The summit presents one of the most spectacular views of the Saser peak in the Karakoram Range, where the K2 lies.

We leave from Leh in a jeep in the morning. At Stok the pony man will load our big backpacks on the horses that are waiting for us. With our small daypacks we head off for Mancarmo through a beautiful valley, where there are unusual rock formations that point skywards in orange, purple, green colors. Mancarmo (4250 m) is the summer pasture of Stok villagers.

Gradually we go higher into a desolate area, which is inhabited only by marmots and blue sheep. Surrounded by high mountains, we, at base camp (5020 m), will prepare our self mentally and physically for the big day. 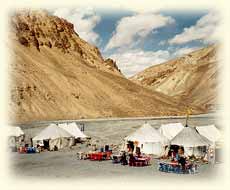 Depending on weather and snow conditions, we leave early around 1:00 am or 2:00 am. Usually conditions are better in the night/morning, when the sky is clearer because it is colder and the snow will be harder to walk on. We just take a cup of tea and bring our lunch bag, before walking into the night with our torches. However, if it is a full moon night, the moon will guide us in its silvery glow. It is a strenuous walk, and in the last part we will most likely use not only ice axes, but also crampons and, maybe, even rope, depending on snow conditions. However, by the time we come close to the top, you will forget about the hardship as you are surrounded by one of the most beautiful sights in the Himalayas, lighted up by the slowly rising morning sun. In good weather conditions we can see the Saser group in the Great Karakoram Range, where K2 lies. To bring good fortune, we leave our Khatag, a religious scarf, on the mountaintop with prayer flags. Leaving the peak, we go down to Base Camp and by the time we arrive, the only thing running in our mind is diving into our sleeping bags for a rest.

This morning we will not hurry and by the time we open our eyes, you realize that you have scaled a peak higher than any mountain in Europe or North America. After breakfast we will walk down to Stok, retracing our footsteps. Upon arrival transfer to Leh by Jeeps.

Today we proceed for Indus Valley monastery tour. We start with a visit to Shey, the ancient capital of Ladakh. The monastery here has a huge gold-gilded statue of Buddha Sakyamuni with a large silver lamp burning in front of the statue. Then we visit Thiksey Gompa, an impressive complex rising tier upon tier on a hill above the village. The monastery has a beautiful 30 m high gold-plated statue of Maitreya Buddha, the Buddha of the future. Drive further to visit the famous Hemis Gompa, founded in 1630's by Stag-tsang-ras-pa under the royal patronage of Sengge Namgyall. Hemis is one of the largest and richest gompas of Ladakh. The two-day festival of monastic dance in June-July has raised the reputation of Hemis particularly high. The festival is dedicated to Guru Padmasambhava, popularly known as second Buddha and responsible for spreading Buddhism in the Tibetan world. Later we visit the Stok Palace, the Royal residence of the King of Stok & the Museum that has a rich collection of Ancient Ladakhi artefacts including old Thangkas, precious stones, arms and armoury, the Queen's necklace and the crown of the King of Ladakh among others. Overnight stay at the hotel in Leh. (Breakfast & Dinner)