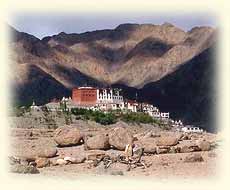 The Nubra Valley lies to the north of Leh and was once the gateway to the ancient Silk route. The valley has vast alluvial plains and bacterian camels, which roam the sandy banks of the Shayok River. This trek is one of the least visited and the beauty of the unspoiled landscape will leave you reminiscing about its stunning views of Karakoram ranges. The beauty of the trek is surpassed only by the final day--a spectacular bus or jeep ride over the highest motorable road in the world (5606 m).

You arrive in Delhi by International flight. After a traditional 'Swagat' (Welcome) our representative would assist you at the airport and to our hotel for check-in. After some rest, breakfast at coffee shop in the Hotel. After breakfast we will go on a guided tour of Delhi at 1100 hrs., beginning with a morning sightseeing trip to Old Delhi and followed by visits to the 1648 Red Fort, India's largest mosque - Jama Masjid and Gandhi Memorial at Raj Ghat. Afternoon tour includes visits to India Gate & President's House. Later on time we drive back to hotel for overnight stay. (Breakfast).

Early morning transfer to Domestic Airport to catch flight for Leh. Upon arrival at Leh Airport our representative would assist you at the Airport and transfer to Hotel. Check in to the hotel. Post breakfast the day for rest for acclimatization. Later in the afternoon a walk around Leh town (3500mtr) includes a visit to Leh Market, Leh Palace, Shanti Stupa & Leh Gompa - This walk shall help us in a getting acclimatized at this height. Overnight stay at the hotel.

We will drive to Phyang monastery, 17km. west of Leh is remarkably built on the hilltop, similar to the Likir monastery. This monastery belongs to the Degungpa Order. It was the first monastery, which introduced the Degungpa teaching of 'Skyob Jigsten Gonbo' in Ladakh that was founded by Chosje Danma Kunga, during the reign of King Jamyang Namgyal in the 16th Century A.D. It has about 50 monks in residence. Phyang also has a festival called 'Phyang Tseruk' on the 2nd & 3rd of the 6th month of Tibetan Calendar. After visiting the Monastery, trek to Phyang Phu. Today is a short day in terms of walking but a good day for acclimatization.

After a leisurely breakfast, we will continue our trek to the base of Lasermo La 4700 m. 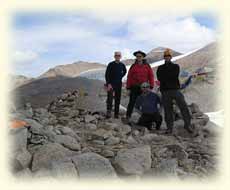 Today we start quite early in the morning as we will cross the Lasermo Pass (5400m). The top of Lasermo pass offers stunning panoramic views of the surrounding peaks, the Indus valley and the Shayok Valley. The trail from the pass towards our camp passes rough moraines for an hour and a half. It is important to start early, as the ponies must cross the glacier before midday in order to avoid difficulties arising from snow and ice melting. The campsite is in a beautiful meadow and offer opportunities to explore and see flowers growing at high altitude.

Today we will walk down through meadows, flowers, and sometimes rocks. Most of the time, we will be walking along the Hundar stream. After following the stream for a while, we will pass through shepherds' huts, where the men and women from Hundar Dok Village live with their Yaks, cows, goats and sheep. They could be seen collecting milk, cheese, butter, wild vegetables and fuel for the winter. If you feel adventurous, you can taste the delicious milk and cheese with Tsampa. Purchasing these is not possible in Leh. Our campsite is just above the Village of Dok Gongma (Upper Dok).

Another beautiful day. We will pass through the villages of Dok Gongma, Dok Yokma and Wachan, which are names of different places with concentrations of scattered houses belonging to a common village known locally as Hundar Dok. If you are not in a hurry to get to your camp at Skarchen (a place where some of the local families go with their animals during the winter), you can spend sometime exploring the villages and share a few moments getting to know the locals.

The last day of trekking is through the beautiful Hunder Gorge, which opens up just before descending to Hunder Bridge. Before the final descent we will have a great view of Saser Kangri Peak (7672m). Upon arrival check in to the tents and later visit Sumur , another pretty village on the other side of the river'; Samstaling Gompa here was founded by Lama Tsultims Nima and Monastic community was introduced as Rezong Gonpa. About 50 monks are residing at this 132 years old Monastery. The Gompa has some strict rules and regulations like not allowing women in the monastery after sunset and before sunrise, no smoking etc. Our tented camp is situated in a beautiful village called 'Hundar' with lot of trees. There is nothing more to see here except a small monastery and ruined fort above the village however the site for the camp is so beautiful that it will invite you to explore the village on own.

Drive across Shyok river and visit hot springs at Panamik . Drive back to Leh over Khandurgla Pass (the highest motorable road in the world) at 5260m. Overnight at the hotel.

Today we proceed for Indus Valley monastery tour. We start with a visit to Shey, the ancient capital of Ladakh. The monastery here has a huge gold-gilded statue of Buddha Sakyamuni with a large silver lamp burning in front of the statue. Then we visit Thiksey Gompa, an impressive complex rising tier upon tier on a hill above the village. The monastery has a beautiful 30 m high gold-plated statue of Maitreya Buddha, the Buddha of the future. Drive further to visit the famous Hemis Gompa, founded in 1630's by Stagtsang- ras-pa under the royal patronage of Sengge Namgyall. Hemis is one of the largest and richest gompas of Ladakh. The two-day festival of monastic dance in June-July has raised the reputation of Hemis particularly high. The festival is dedicated to Guru Padmasambhava, popularly known as second Buddha and responsible for spreading Buddhism in the Tibetan world. Later we visit the Stok Palace, the Royal residence of the King of Stok & the Museum that has a rich collection of Ancient Ladakhi artefacts including old Thangkas, precious stones, arms and armoury, the Queen's necklace and the crown of the King of Ladakh among others. Overnight stay at the hotel in Leh. 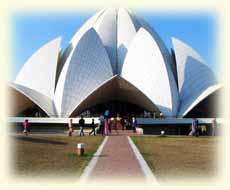 After an early breakfast, we drive at 0730 hrs to Agra, the erstwhile capital of India under the great Mughals and known for The Taj Mahal It has always fascinated Indians and foreigners alike. On the way we visit Sikandra (Tomb of Emperor Akbar). At Agra after lunch (own lunch) We visit the incredible architectural excellence of Taj Mahal, built by emperor Shah Jahan in memory of his beloved wife Mumtaz Mahal. Next we visit Agra Fort - Built principally as a military establishment by Akbar in 1565, the red sandstone Agra fort was partially converted into a palace during Shah Jahan's time. Though the principal structure was built by Akbar, many more additions were made by his grandsons. This massive fort is 2.5 kms long and is considered as the predecessor of the Delhi Red fort. After Visiting the fort we drive back to Delhi at 1700 hrs. Upon arrival in Delhi. Finally we will have farewell dinner and later we transfer you to the International airport.

Our tour concludes: We thank you for your patronage and ensures a punctual transfer to the International airport for your onward travel to next destination.